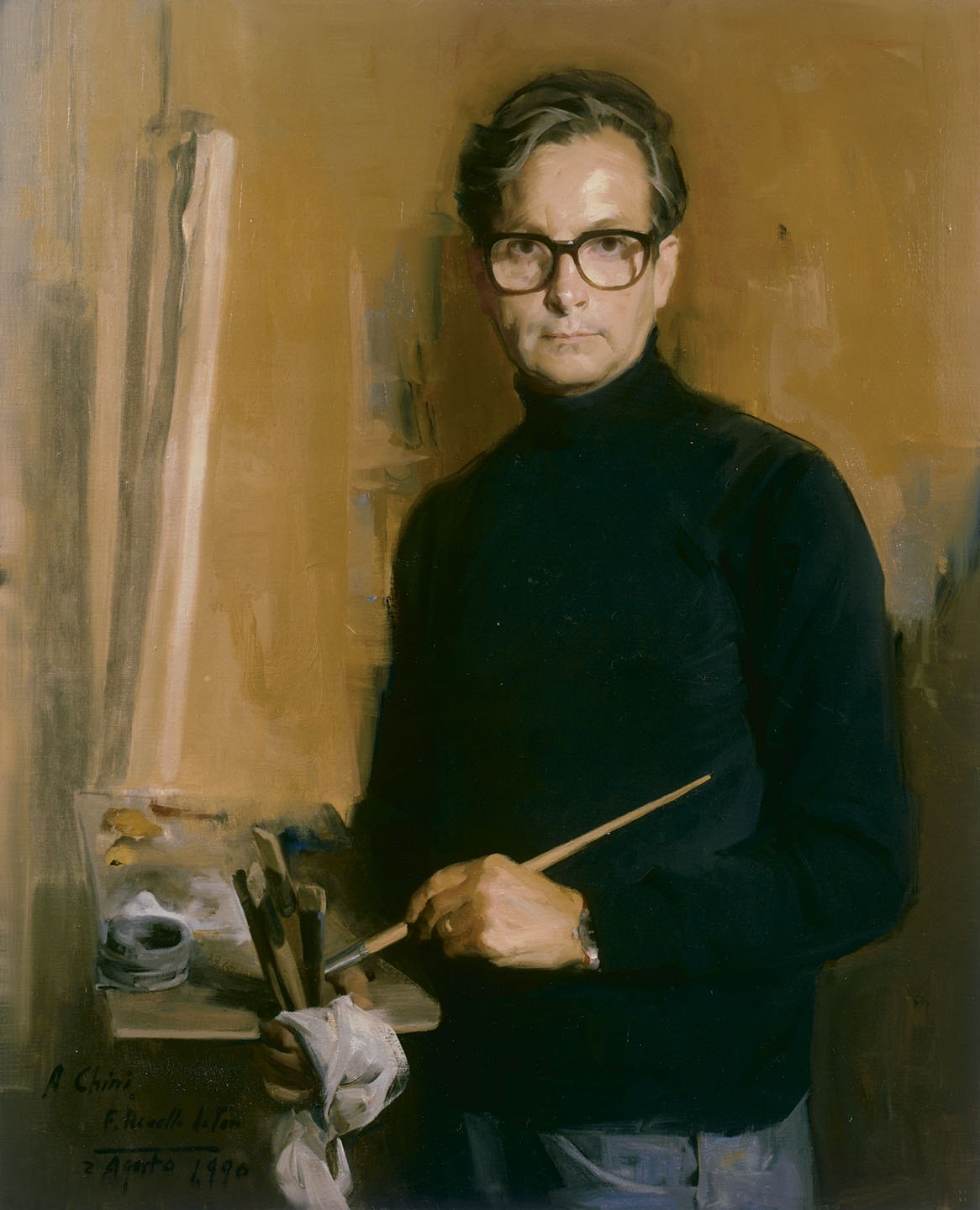 1926 He is born in Noble Hospital, Málaga on 10 June, the son of art teacher José María Revello Cazar.

1935 As an eight-year-old he makes an extraordinary drawing of the Cristo de Mena. After the early death of his father, his family is left in a difficult economic situation at the start of the Spanish Civil War.

1943 After finishing his secondary education at San Estanislao School he is granted a scholarship by Málaga City Council to study Fine Arts at San Fernando Academy in Madrid. He paints Los quince Misterios Del Rosario for the Sentencia Brotherhood.

1945 In return for his scholarship he sends Malaga City Council two of his works: Niño con pájaro and Escribidme una carta, Sr. Cura.

1950 He finishes his Fine Arts studies which he passes with distinction and receives the Pérez Madrigal Award.

1951 He travels to Italy thanks to twice winning the Carmen Del Río Scholarship and he continues his studies at the Spanish Fine Arts Academy in Rome.

1952 His first important exhibition in the Macarrón Gallery in Madrid gets good reviews from the critics and receives public acclaim.

1956 He marries Chini, settles in Barcelona and obtains a professorship at La Llotja Fine Arts School in Barcelona.

1957 Birth of his daughter Carmen.

1968 Exhibition in the Garbi Gallery in Valencia.

1973 He gives up his Fine Arts professorship to dedicate himself completely to painting.

1976 He produces his first official portrait of the Prince of Asturias.

1983 He finishes the Tríptico Mediterráneo, one of his most ambitious paintings.

1988 He paints the collective portrait of the International Olympic Committee which voted for Barcelona’s candidature for the Olympic Games 1992, for the headquarters of this organization in Lausanne (Switzerland). He paints his first poster for the Málaga feria.

1990 He is granted the freedom of Barcelona City, receiving the Golden Key. San Telmo Royal Fine Arts Academy in Málaga grants him an honorary doctorate.

1991 He paints the two large official portraits of the Spanish Monarchs for the ABC head office.

1993 The Málaga Press Association honours him with their Gold Badge Award.

1994 The National Association of Cultura Viva makes him an honorary member and awards him their Gold Insignia. He paints his first official poster for Málaga’s Holy Week.

1995 Málaga City Council awards him their Gold Medal and honours him with the title ‘Favourite Son’.

1998 The Barcelona Royal Academy of Arts and Sciences appoints him as Corresponding Member.

2001 The Málaga Regional Council honours him with their Gold Medal and the title ‘Favourite Son of the province’ and the City Hall names a street in Málaga after him. First big retrospective exhibition in Madrid, organized by Banco Santander Central Hispano, and visited by the king and queen of Spain. His wife Chini dies.

2002 The Junta de Andalucía honours him with the ‘Favorite Son’ title and awards him the Andalusia Medal.

2006 The first exhibition of paintings he donated to the city of Malaga opens in the Málaga Municipal Archives to celebrate his 80th birthday.

2007 A second exhibition opens of new paintings donated to the future museum which will be named after him. For the second time he paints the poster for the Málaga feria.